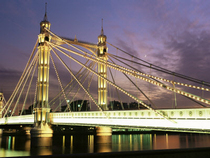 Designed and built by Rowland Mason Ordish, as an Ordish-Lefeuvre system modified cable-stayed bridge. It proved to be structurally unsound, so between 1884 and 1887 Sir Joseph Bazalgette incorporated some of the design elements of a suspension bridge. In 1973, two central concrete piers were added which transformed the middle span into a simple beam bridge. As a result, it is an unusual hybrid of three different design systems. It was opened as a toll bridge, but was commercially unsuccessful. The tollbooths are still in place, being the only surviving examples of such in London. Long before the problems with the Millennium Bridge, it was nicknamed 'The Trembling Lady' because of its tendency to vibrate when large numbers of people walked across it. At night it is illuminated by 4,000 LEDs (Light-Emitting Diodes).

The Franz-Josef Bridge in Prague, demolished 1941, was near identical. Ordish built that in 1868 during a lull in the designing of the Albert Bridge brought about by the simultaneous designing of the Chelsea Embankment.

This section lists the memorials where the subject on this page is commemorated:
Albert Bridge

A pair of these markers is attached to each side of the bridge, with CP alway...

In 1831 the Broughton Suspension Bridge collapsed as a troop of 74 men marche...

Architect of the 1901 Shoreditch Town Hall Extension and of Campden Hill Mans...

Architect of John Street and/or Bedford Row, our source, The Vauxhall Society...