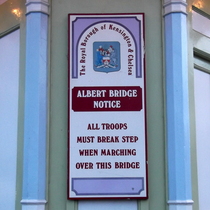 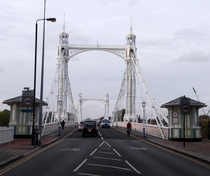 Albert Bridge Notice. All troops must break step when marching over this bridge.
The Royal Borough of Kensington & Chelsea

In 1831 the Broughton Suspension Bridge collapsed as a troop of 74 men marched across. Investigations put this down to the effects of mechanical resonance and the army issued an order that troops should ‘break step’ when crossing a bridge.

Given that order no notices should be necessary but the proximity of Chelsea Barracks is cited as the reason for these notices. The Barracks, opened in 1862, closed in 2008 so the notices are no longer needed. These ones were erected after 1965 (when the RBKC came into existence) but perhaps they replaced earlier ones.

This section lists the subjects commemorated on the memorial on this page:
Albert Bridge - troops

Designed and built by Rowland Mason Ordish, as an Ordish-Lefeuvre system modi...

This section lists the subjects who helped to create/erect the memorial on this page:
Albert Bridge - troops

This section lists the other memorials at the same location as the memorial on this page:
Albert Bridge - troops

{Between the crests of the Essex Regiment and West Ham United:}Dedicated in m...