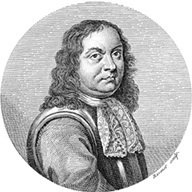 Admiral. The date given is his baptism, in Bridgwater, Somerset where there is now a museum and a statue. First fought for Cromwell in the army and was then appointed "General at Sea". 1652-3 he was successful against the Dutch fleet but during this campaign he was wounded south of Portland Bill (schoolboys can have a good titter here.) He went on, in 1657, off Tenerife, to defeat Spain’s West Indian Fleet. But he had never fully recovered from the old wound and, returning home, he died in sight of Plymouth and was given a state funeral at Westminster Abbey.

When Charles II was restored to the throne he ordered the disinterment of the bodies of Oliver Cromwell and his supporters, including Blake, and their reburial in an unmarked pit in St Margaret's churchyard, Westminster. On that plaque his title is given as Col. which he was for a time.

This section lists the memorials where the subject on this page is commemorated:
Admiral Robert Blake

Opening of the Holloway Fire Station