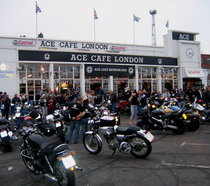 It originally catered for the traffic on the newly opened North Circular Road. Destroyed in an air raid, it was rebuilt in 1949 and through the 50s, became a haven for the 'ton-up-boys' and then for the 'rockers' in the 60s. One of the regulars here was the neurologist Oliver Sacks. Trade declined, as traffic moved to the motorways and it closed in 1969. Interest was rekindled in the 1990s, following the setting-up of the 'Rockers' Reunions' and it re-opened in 1997. It was the location for the 1964 film 'The Leather Boys'.

This section lists the memorials where the subject on this page is commemorated:
Ace Cafe

A Bengali Muslim, he joined the East India Company aged 11, where he served a...

The Ivy, opened by Abele Giandolini, as an unlicensed Italian cafe in 1917 in...

Bishop of London's oven in Cornhill