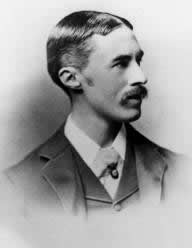 Alfred Edward Housman. Born near Bromsgrove in Worcestershire. Classical scholar, lyrical poet. On his twelfth birthday his mother died. He initially failed his degree at Oxford but went on to be appointed Professor of Latin at University College London and to hold a similar post and Fellowship at Trinity College, Cambridge. He left Oxford and joined the Patent Office where Moses Jackson, whom he had met at Oxford, was working. A homosexual at a time when this was not acceptable, Moses was the love of his life, but did not return his affections. Housman's ashes are buried at St Lawrence's Church, Ludlow. In 1985 a statue was erected in Bromsgrove High Street.

This section lists the memorials where the subject on this page is commemorated:
A. E. Housman

Lovely graphic border to this plaque - ears of corn.