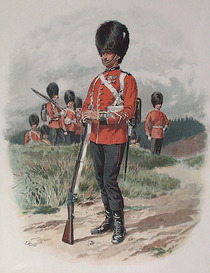 The 6th Battalion, Grenadier Guards, was raised in 1941 in Caterham, Surrey. In June 1942 it set sail from Liverpool to Syria where it became part of 201st Guards Brigade. It had to guard the border and protect the oil pipelines at Kirkuk.

In March 1943 it moved to North Africa to join 8th Army under General Montgomery and trained as "Motorised Infantry" in desert warfare where on 16 March 1943, a few days after its arrival, the battalion was engaged in the first battle at the Mareth Line, known as "The Battle of the Horseshoe". The battalion suffered a high loss in casualties.

On 9 September 1943 they landed at Salerno in Italy attached to the 5th Army, 201st Guards Brigade and part of the 'Black Cats' 56 Division under the American General, Mark Clark. On 8 November 1943 the battalion was in action on the Monte Camino for 4 days and suffered greatly. When on 12 November 1943 the battalion moved down from the mountain they had only 260 men fit for duty. They were never committed to a major battle again although they continued in action on the River Garigliano and at Minturno.

The battalion was disbanded on 6 December 1944.

This section lists the memorials where the subject on this page is commemorated:
6th Battalion, Grenadier Guards

Serjeant John Copping was born in 1880 in Hacheston, Suffolk and his birth wa...

In Britain, the term was originally applied to the conscription of men during...

Unit of soldiers raised in Manchester during the 1745 Jacobite Rebellion, sup...