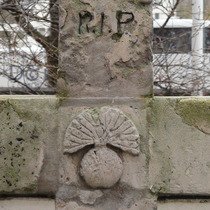 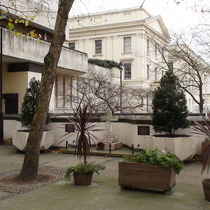 {On the plaque to the left:}
Battle of Mareth
On the night of 16th March 1943, the 6th Battalion Grenadier Guards, commanded by Lieut-Colonel A. F. L. Clive DSO, MC was ordered to attack a formidable and prepared position on the frontier between Libya and Tunisia. The attack was carried out by moonlight across a deep wadi, two successive minefields, and against a strongly entrenched enemy, mainly the celebrated German 90th Light Division. Although, unknown to the Battalion, surprise had been compromised by the capture of a marked map from another unit, all objectives were reached. The immense number of closely laid mines and the resulting very heavy casualties prevented support weapons reaching the forward positions during the night, and without these, effective defence against counter-attack became impossible. The Battalion was ordered to withdraw at first light. Of the 29 officers who went into battle 14 were killed, 5 wounded and 5 taken prisoner of whom 2 were wounded. 63 other ranks were killed, 88 wounded, and 104 taken prisoner of whom the majority were wounded.

History records this as one of the greatest and most terrible battles fought by the Regiment in the Second World War.

{On the plaque to the right:}
The Mareth Cross
After the battle, the pioneers of the 6th Battalion built this memorial cross from local stone, carved the inscription, and placed it in the Grenadier Cemetery on the battlefield. In 1945 the graves were moved to the Military Cemetery at Sfax, but the cross was left standing alone in the desert. In 1957, the French GOC in Tunisia noticed that the cross had been damaged by local Arabs and removed it to his garden for safety. Later, the pieces were shipped home to the Guards depot at Caterham for restoration, where the cross remained until 1960 when the depot moved to Pirbright and it was placed in All Saints Church. It was moved to its present site and dedicated on 21st May 1995.

This cross, fashioned by their own comrades, enshrines the memory of the Grenadiers who fell at Mareth, and stands also in honour of the 6th Battalion Grenadier Guards, whose discipline and valour in the battle won the admiration of friend and foe alike, and whose sacrifice earned the honour which is emblazoned on the colours of the regiment.

This monument, created from local stone, was originally erected on the battlefield in North Africa.  First moved into a nearby garden for its own protection it was then taken to the Guards depot at Caterham, then, moved with the Guards to Pirbright, and finally, in 1995, it came here.

2015: we learnt that when the British pulled out of Helmand, Afghanistan they also brought home the memorial that had been erected there.  From the Economist: "After a final military vigil on October 9th the wall of names at Bastion was dismantled and transported back to Britain. This is unusual - memorials at the sites of foreign battles are typically permanent - but not entirely unprecedented. A wall of names at Basra air base in Iraq was taken down when British soldiers withdrew in 2009."  "Fears that the Taliban might desecrate the wall in Helmand reportedly motivated the decision to bring it home."

This section lists the subjects commemorated on the memorial on this page:
Battle of Mareth

In Southern Tunisia.  Also known as the Battle of the Horseshoe.  To quote th...

The 6th Battalion, Grenadier Guards, was raised in 1941 in Caterham, Surrey. ...