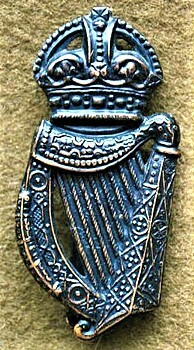 The 18th (County of London) Battalion, The London Regiment (London Irish Rifles) was formed on 1 April 1908 by the amalgamation of regiments under the Territorial and Reserve Forces Act 1907. Both our picture source and their Wikipedia page gives details about the origins of the battalion, their battle honours and how it was disbanded in 1919 and subsequently reconstituted as a component of the new Territorial Army.

During the Battle of Loos in 1915 the battalion distinguished itself while storming across no man's land to capture the enemy trenches, Rifleman Frank Edwards, the captain of the battalion's football team, kicked a football along in front of the troops to encourage them forward.

This section lists the memorials where the subject on this page is commemorated:
18th Battalion (London Irish Rifles)