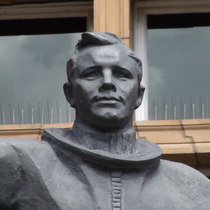 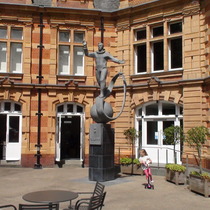 The statue, a gift via the British Council, to the UK from the Russian Space Agency, is a copy of an existing one outside Gagarin's former school in Lyubertsy where he trained as a foundry worker. It is zinc alloy on a Portland Stone base and was unveiled at the Royal Observatory on Gagarin's 79th birthday. As far as we know this position is permanent.

This statue was first installed on The Mall, on the small piazza just to the west of the British Council Building at Admiralty Arch. The arrival of the statue marked the 50th anniversary of Gagarin’s first earth orbit (12 April 1961). It was installed on 14 July 2011 exactly 50 years after Gagarin's only visit to the UK and on the spot where he met the Prime Minister Harold MacMillan.

This section lists the subjects commemorated on the memorial on this page:
Yury Gagarin statue

This section lists the subjects who helped to create/erect the memorial on this page:
Yury Gagarin statue