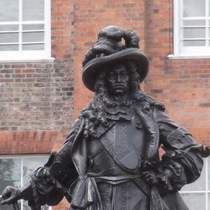 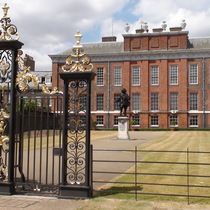 {On the front of the plinth, below a carved crown with laurel leaves:}
William III of Orange, King of Great Britain and Ireland 1689 - 1702.
Presented by William II, German Emperor and King of Prussia, to King Edward VII for the British Nation, 1907.

At Berliner-Schloss (with heavy use of translation tools) we learn that this statue may enable its ill-fated twin to rise again.

The story starts in Berlin, on the terrace of the Lustgarten of the Berliner Schloss, the Kaiser's palace. In 1907 Kaiser Wilhelm II had statues made of five important Princes of Orange to adorn the balustrade around his terrace. He also had duplicates made and gave them to countries/friends of his to whom they had significance. Thus the duplicate statue of William III, our King William of Orange, was offered to Wilhelm's uncle, our King Edward VII. It was accepted and probably actually given during Wilhelm's visit to London in November 1907.

The good relations between Britain and Germany rather broke down during WW1 but the Berlin statues survived. They fared worse in WW2; all but one of the five statues in Berlin were badly damaged and, it is believed, were melted down in the early 1950s.

But now, 2015, Berliner-Schloss is being renovated and consideration is being given to the reconstruction of the Lustgarten terrace together with recreations of the five statues. This is only possible because the duplicates were made and given to places where they remained safe.

Cast by the Berlin foundry Gladenbeck, this statue was given a thorough cleaning and conservation on its 100th birthday in 2007.

Since William III and Mary were the monarchs who turned this house into a royal palace this was the obvious site for this statue.

A brief comment on the Palace facade - the keystones above the 3 central ground floor windows are each decorated with a carved head. The middle one represents Hercules (a man's head poking out from a lion's skin) and those either side look like classical women but we can't identify them.

This section lists the subjects commemorated on the memorial on this page:
William III statue - W8

This section lists the subjects who helped to create/erect the memorial on this page:
William III statue - W8

This statue used to be in the Constitutional Club (disbanded 1979) at 28 Nort...