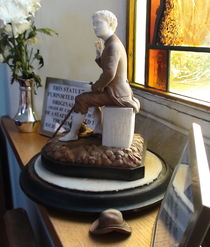 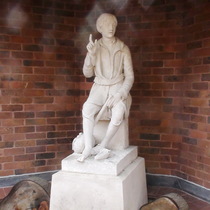 On an information board beside the statuette: “The terracotta statuette of Richard Whittington was presented to the Company by Mrs R. M. LeRoy of 9 The Avenue, Redhill Park, Bournemouth, in July 1945. The then House Warden reported to the Court of Assistants on 6th July 1945 that the statuette purported to be the original model by C. B. Birth, made in 1873, of a statue said to be erected about this date to the memory of Richard Whittington.”

The statuette shows Whittington in the same pose as that of the Felbridge Carew statue but it is only about 12 inches high and the fine modelling shows significant differences, for example, the positioning of the legs and feet. The stone on which he sits and the exposed lower legs, hands and head are in white marble, the rest of the statue – the ground, the clothed body, are in terracotta. And there is a detachable hat, which may not be original.

We found a bronze statue of Whittington created by C. B. Birch in 1873. Here Whittington stands, leaning against a milestone, looking over his left shoulder, on which his bindle rests. ('Bindle' is the stick with a bundle of possessions traditionally used by vagabonds.) We have not examined the statuette closely and maybe it carries Birch's signature but the existence of the standing Whittington statue by Birch causes us to question the attribution of the statuette. Back in 1945 the House Warden's research was done without benefit of internet and we wonder if the Warden discovered the existence of Birch's 1873 statue and, sight unseen, assumed this was a model of it.

This statuette is not a maquette, that's a sculptor's scale model, a rough draft for a full size sculpture. It is a finished, finely-detailed miniature and, with the mixed materials, is something of a novelty piece.

To summarise: We think the Birch attribution is incorrect, and that this statuette was probably created at about the same time as the Felbridge statue, possibly by Carew or one of his assistants, especially for the Great Exhibition as a miniature "master piece" displaying their skills. See the lost Archway statue for our evidence.

In 1966 The Whittington Almshouses, or College, moved from Archway to this site within the grounds of the former Felbridge Place. They provide care for over 60 elderly residents. This statue of their founder moved with them and initially it was placed close to the road. It suffered some damage and over its time here some fingers and some toes have had to be replaced. It has also been painted and then had the paint removed. It now sits safely in an internal courtyard surrounded by residential buildings.  The statuette, also at Felbridge, is kept inside the church under a glass dome.

The College have asked us to make it clear that they do not have the resources to encourage visitors, the statues are not on public display and that we were only allowed in having made special arrangements, for which we are extremely grateful.

This section lists the subjects commemorated on the memorial on this page:
Whittington statuette - Felbridge

This section lists the subjects who helped to create/erect the memorial on this page:
Whittington statuette - Felbridge

This section lists the other memorials at the same location as the memorial on this page:
Whittington statuette - Felbridge