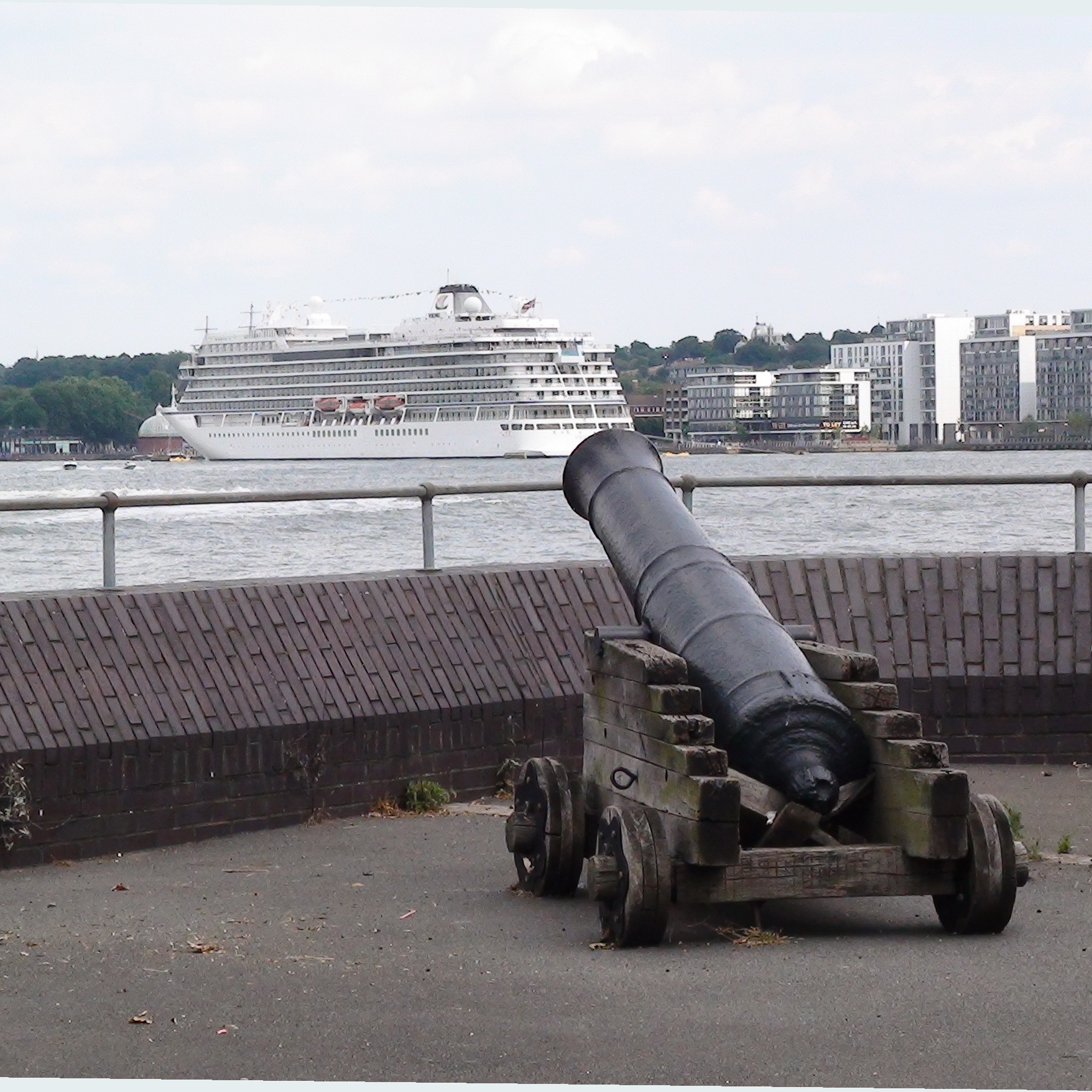 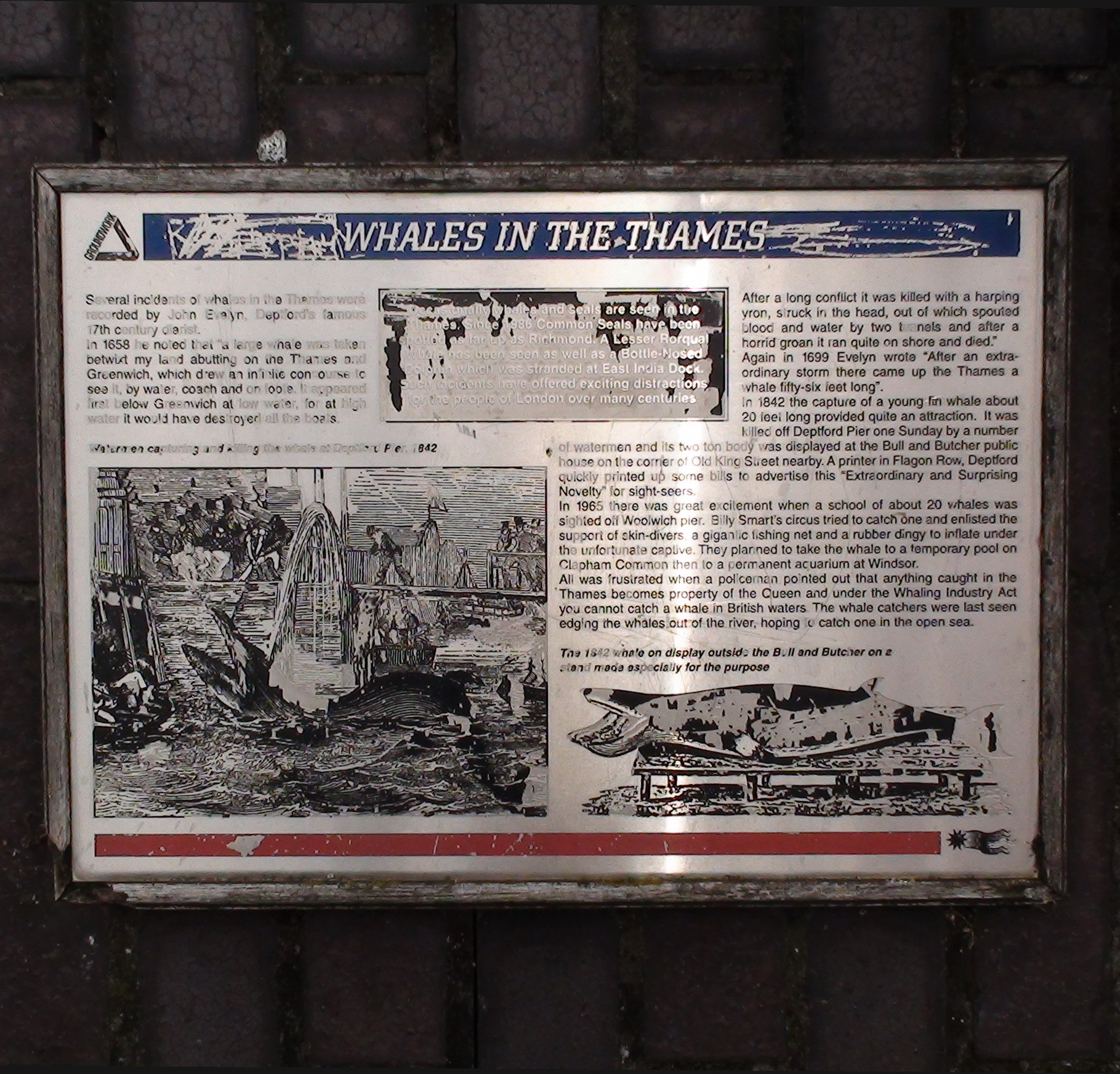 Whales in the Thames

{In the panel at the top centre:}
Occasionally whales and seals are seen in the Thames. Since 1986 Common Seals have been spotted as far up as Richmond. A Lesser Rorqual Whale has been seen as well as a Bottle-Nosed Dolphin which was stranded at East India Dock. Such incidents have offered exciting distractions for the people of London over many centuries.

{The rest of the text:}
Several incidents of whales in the Thames were recorded by John Evelyn, Deptford’s famous 17th century diarist. In 1658 he noted that “a large whale was taken betwixt my land abutting on the Thames and Greenwich, which drew an in the concourse to sea it, by water, coach and on foote. It appeared first below Greenwich at low water, for at high water it would have destroyed all the boats.

After a long conflict it was killed with a harping yron, struck in the head, out of which spouted blood and water by two tunnels and after a horrid groan it ran quite on shore and died.”
Again in 1699 Evelyn wrote “After an extraordinary storm there came up the Thames a whale fifty-six feet long”.
In 1842 the capture of a young fin whale about 20 feet long provided quite an attraction. It was killed off Deptford Pier one Sunday by a number of watermen and its two ton body was displayed at the Bull and Butcher public house on the corner of Old King Street nearby. A printer in Flagon Row, Deptford quickly printed up some bills to advertise this “Extraordinary and Surprising Novelty” for sight-seers.
In 1965 there was great excitement when a school of about 20 whales was sighted off Woolwich pier. Billy Smart’s Circus tried to catch one and enlisted the support of skin-divers, a gigantic fishing net and a rubber dingy {stet} to inflate under the unfortunate captive. They planned to take the whale to a temporary pool on Clapham Common then to a permanent aquarium at Windsor.
All was frustrated when a policeman pointed out that anything caught in the Thames becomes property of the Queen and under the Whaling Industry Act you cannot catch a whale in British waters. The whale catchers were last seen edging the whales out of the river, hoping to catch one in the open sea.

{Image at the left:}
Watermen capturing and killing the whale at Deptford Pier 1842.

{Image at the right, which we could not find on-line:}
The 1842 whale on display outside the Bull and Butcher on a stand made especially for the purpose.

We were sceptical but a 2012 article in Time confirms: “Technically, the Queen still owns the sturgeons, whales and dolphins in the waters around the U.K. A statute from 1324”.

"Old King Street" now Watergate Street is actually some distance south, the other side of the huge Convoys Wharf development site. Possible photo of the Bull and Butcher pub.

Site: Whales in The Thames (1 memorial)

This rather distressed plaque is on the river wall at the point at which Foreshore turns inland. Our photo shows the same wall a little to the south, and in the distance, another 'whale' that has taken up residence in the Thames on the Greenwich bank. We'd heard there was a campaign against huge polluting cruise liners docking in London but we had not realised that it is already happening. Looks like someone is already preparing some deterrence.

This section lists the subjects commemorated on the memorial on this page:
Whales in The Thames 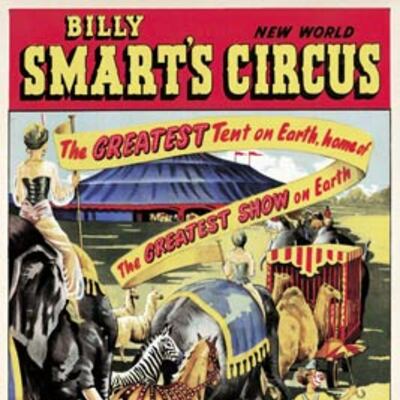 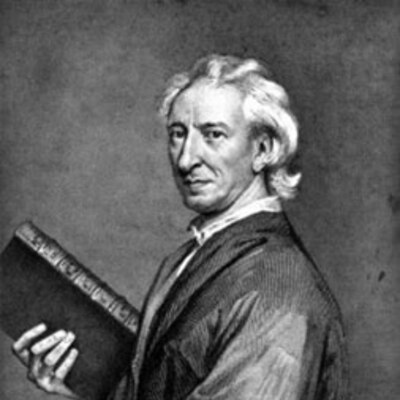 This section lists the subjects who helped to create/erect the memorial on this page:
Whales in The Thames 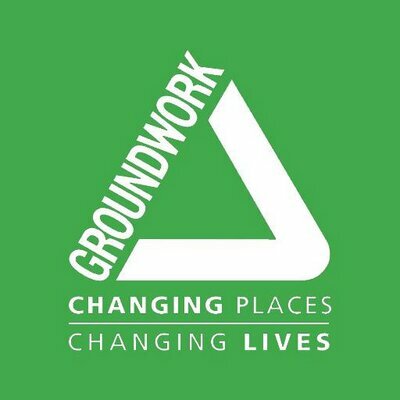 An environmental agency based in Birmingham. It works with communities across... 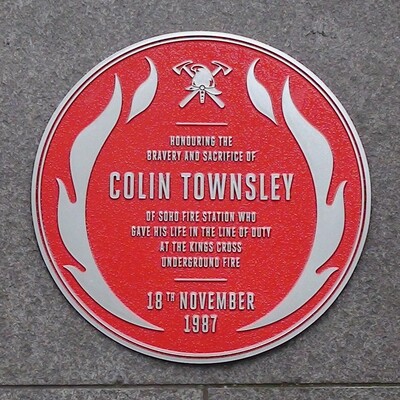 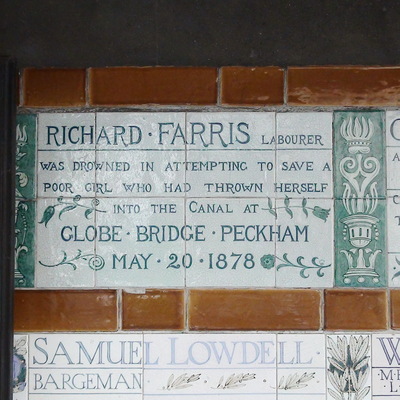 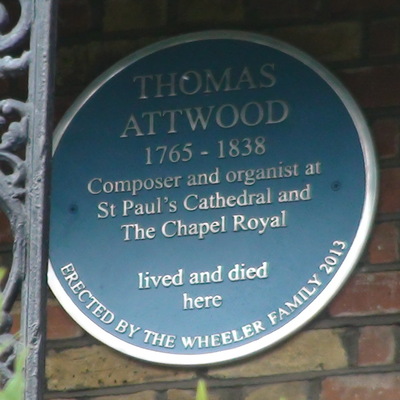 Thomas Attwood, 1765 - 1838, composer and organist at St Paul's Cathedral and the Chapel Royal, lived and died here. Erected by the Wheel... 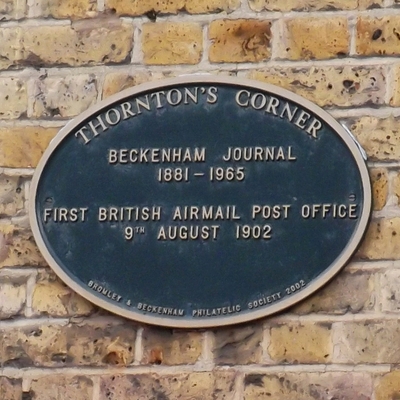 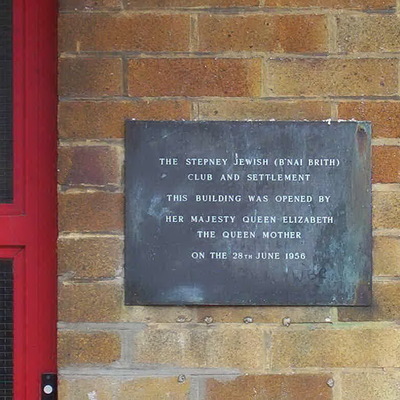 Our photo comes from Jewish East End. We cannot see the plaque outside the building so perhaps it is inside, or lost, or we have the wro...