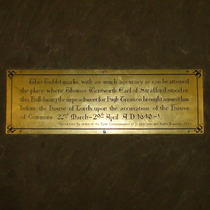 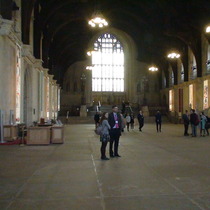 This tablet marks, with as much accuracy as can be attained, the place where Thomas Wentworth, Earl of Strafford, stood in this Hall during the impeachment for high treason brought against him before the House of Lords, upon the accusation of the House of Commons: 22nd March - 29th April AD 1640-1.
Placed here by order of the First Commissioner of H. M. Works and Public Buildings 1895.

We're guessing the plaque was installed by Gladstone since he would not have known that the year alone was insufficient information, whereas Akers-Douglas would have. Interesting that Gladstone Jnr. installed this plaque here just 3 years before his father's death and lying-in-state in this same Hall.

These 9 plaques are laid into the floor of the hall, in a line down the middle, in this sequence, starting at the entrance end: R101; Hastings; Wentworth; More; Churchill; King Edward VII; Gladstone; King George VI & Queen Elizabeth; and King George V & Queen Mary.

Since capturing these 9 we've seen more on the stairs at the southern end of the hall. Need to visit again.

This section lists the subjects commemorated on the memorial on this page:
Westminster Hall - Wentworth

This section lists the subjects who helped to create/erect the memorial on this page:
Westminster Hall - Wentworth

Gladstone was born in Downing Street, the youngest son of William, who was Ch...

This section lists the other memorials at the same location as the memorial on this page:
Westminster Hall - Wentworth

Winston Churchill lay in state here from the twenty seventh of January until ...

On this spot, awaiting sepulture in Westminster Abbey, rested, from May 26 to...

His Majesty King George the Sixth lay in state here from the eleventh of Febr...

{Inscribed on the stone below the casket:} Vernon House was bought by The Ove...