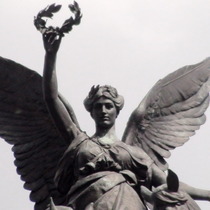 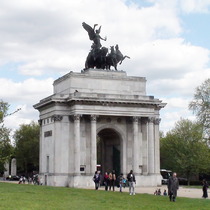 {Plaque on the west face of the arch:}
The Quadriga surmounting this arch was presented to the nation as a mark of deepest loyalty and respect to his late revered Majesty Edward VII by Herbert First Baron Michelham of Hellingly KCVO.

While still Prince of Wales, Edward VII saw a plaster version of this sculpture and initiated the idea of a bronze version being erected on this arch. Stern anonymously provided the necessary funds and the sculpture was erected 2 years after Edward had died, which explains the wording on the plaque, though it's not clear when Stern 'came out' as the donor.

The remarkably steady-looking passenger in the chariot is the winged goddess Victoria, modelled by Jones on Beatrice Stewart. She's not driving the vehicle - that difficult task falls to a young boy, modelled on Herman, the 10 year-old son of the funder, Herbert Stern. This information, and more, is found at Ornamental Passions, where there is also a good photo of the lad - compare it with the photo of him on this page, aged 22.

Note: It's probably obvious but a 'quadriga', from Latin, is a two-wheeled chariot drawn by four horses abreast; the goddess  is optional.

A turnpike at this location, at the road into London passing between the two large parks, Hyde Park and Green Park, had led to the idea that this was the entrance to London. See the 'Hyde Park Gate' turnpike on a map. In 1825 under George IV and to celebrate our successes in the Napoleonic Wars it was decided to create a grand entrance to London here. This was composed of two parts: to the north, the joined three arches, known as the Hyde Park Screen, still there today and acting as an entrance to Hyde Park; and immediately facing it, on the south side of Piccadilly, this arch sometimes known as the Green Park Arch, or the Constitution Arch, acting as an outer entrance to Buckingham Palace. Remember: what is now a huge traffic roundabout was still part of Green Park and Buckingham Palace Gardens.

As traffic increased this grand entrance, between the Screen and the Arch, became a bottleneck and it was decided to create a road cutting the corner from Piccadilly to Grosvenor Place and to move the Arch to its present position, all of which was done in 1883-5.

Designed by Decimus Burton as a triumphal arch, richly ornamented and topped with a gilded quadriga, it outgrew its budget and so was completed without all the ornamentation and without the quadriga. In 1838 a committee, looking for somewhere to erect a memorial to Wellington (though he was still very much alive), chose the top of this arch, it being so close to Apsley House, the great man’s London home. A huge equestrian statue was duly erected in 1846 on top of the arch and was greeted with widespread ridicule. Spitalfields Life have a c.1880 photo and it is ridiculous. There was much public discussion, and humour: people generally agreed with Burton that the Archduke (for so it was nicknamed) was vastly out of scale with the arch. When the statue’s removal was proposed Wellington objected, so there it stayed. He died in 1852 but the statue remained until the Arch was moved in the 1880s. The statue was taken down and re-erected on a new pedestal near the Garrison Church at Aldershot, where it remains. And a new more moderately-sized statue of Wellington was commissioned for Hyde Park corner, and erected.

Most of this information is taken from the English Heritage page, which also has some very good pictures.

At Road Record we learn that on 22 March 1926 "The first one-way traffic system in London came into operation at Hyde Park Corner, at the time the world’s busiest road junction."

The giant statue appears, briefly, in the 1968 film 'The Charge of the Light Brigade'. Part of it hoves into view immediately outside a window in which some of the characters are conversing. Our memory is dim, and we may even have the wrong film (since the events in the film probably take place during the time that the statue was stationary atop the arch) but we think not. Another view of the statue in 1866 can be seen at Reformers Tree - here, given the distance, you really get a feel for how big it was.

2014: Ian Visits brings the story right up to date with a good investigative piece where we learn that part of this monument is a ventilation shaft for the road tunnel below and has been since 1962. He has also found some British Pathe footage of the building works, starting at about 1:50.

The central arch of the Hyde Park Screen has a classical, Elgin-marble-like frieze which is well covered by Ornamental Passions.

2022: The Past has a very interesting article about the history of triumphal arches (paywall but a free trial, at the time of writing).

This section lists the subjects commemorated on the memorial on this page:
Wellington Arch - Quadriga

An only child, he succeeded his father as the second Lord Michelham, and on h...

This section lists the subjects who helped to create/erect the memorial on this page:
Wellington Arch - Quadriga

Son of Baron de Stern. Started in his father's banking business but left in a...

This section lists the other memorials at the same location as the memorial on this page:
Wellington Arch - Quadriga

This plaque is inside the chariot of the Quadriga. We have Matt Brown of Lond...

{On the plaques attached to the brickwork, the right-hand one being in Englis...

"Mother and Child" was created by Hawkins and was commissioned by Justice for...