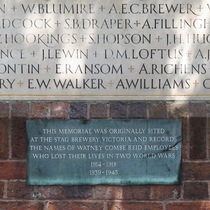 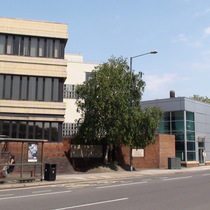 {On the small plaque below:}
This memorial was originally sited at the Stag Brewery, Victoria and records the names of Watney Combe Reid employees who lost their lives in two world wars: 1914 - 1918, 1939 - 1945.

The names are not in the more standard columns format but, for each war, they are given in a continuous line, alphabetical with a few exceptions. We were trying to understand these exceptions when we realised that each one indicated a spelling/punctuation mistake. e.g. we believe that  "C. M. C. Farlane" in the middle of the Ms should read "C. McFarlane".  There are 3 other similar mistakes which we have corrected and noted on the individual records.

This section lists the subjects commemorated on the memorial on this page:
Watney war

This section lists the other memorials at the same location as the memorial on this page:
Watney war