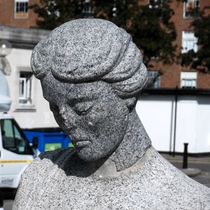 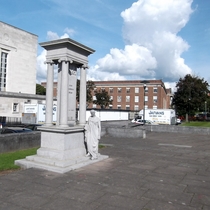 {On a small plaque at the base of the column:}
In memory of the fallen of Walthamstow 1945 to present day.

The memorial was originally located at Lloyd Park, and moved to its current location in 1961. We're guessing that may have been prompted by some vandalism, given the rather badly reattached head.

History in Pictures has 3 photos of this memorial in the 1920s, draped with flowers, in its original location. These show it to the south-west of the front of what is now the William Morris Gallery. It looks as if it was close to, and accessible from, the pavement and set in a curved bay with railings and a low brick wall to the north, separating it from the grounds of the house, with some white plaques laid into the wall.

This section lists the subjects commemorated on the memorial on this page:
Waltham Forest Town Hall war memorial

People of Walthamstow killed in WW1 and WW2

Fallen of Walthamstow since 1945

The statue is named 'Victory'. While the form of the monument is very differe...

{On the large plaque with an image of protesters on a map of Africa:}Sharpevi...

{There are 5 panels alternating with a balustrade. On the central panel, insi...