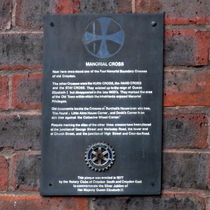 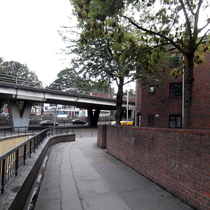 {Beneath a Maltese cross:}
Manorial Cross
Near here once stood one of the four manorial boundary crosses of old Croydon.
The other crosses were the Hurn Cross, the Hand Cross and the Stay Cross. They existed up to the reign of Queen Elizabeth I but disappeared in the late 1600's. They marked the area of the old town within which the inhabitants enjoyed manorial privileges.
Old documents locate the crosses at 'Burchall's House in an elm tree, The Pound; Little Alms House Corner, and Dodd's Corner in an elm tree against the Catherine Wheel Corner.'
Plaques marking the site of the other three crosses have been placed at the junction of George Street and Wellesley Road, the lower end of Church Street and the junction of High Street and Coombe Road.

The plaque is on the wall just above and to the right of the AA van in our photo.

This section lists the subjects commemorated on the memorial on this page:
Unknown Manorial Cross - Croydon

This section lists the subjects who helped to create/erect the memorial on this page:
Unknown Manorial Cross - Croydon

The lettering on this inscribed stone is delightful: in "THE" the "H" is just...