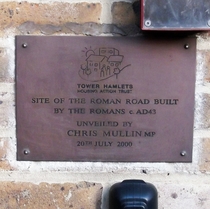 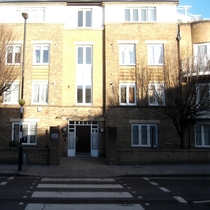 The plaque is on the right of the 'Iceni Court' name plaque.

The Iceni were a Brittonic tribe of eastern Britain during the Iron Age and early Roman era. Their territory was on the coast to the north-east of London but their rebellion of AD 60–61, under their queen, Boudica, could have brought them to E3.

This section lists the subjects commemorated on the memorial on this page:
Roman Road - Iceni Court

This section lists the subjects who helped to create/erect the memorial on this page:
Roman Road - Iceni Court

Former politician and author. Member of Parliament for Sunderland South from ...

This plaque was given by the Royal Navy in memory of Captain Ralph Douglas Bi...

The incident commemorated takes place in the first Sherlock Holmes story "A S...