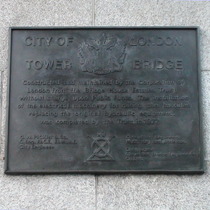 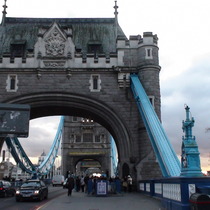 City of London Tower Bridge
Constructed and maintained by the Corporation of London from the Bridge House Estates Trust without charge upon public funds.  The installation of the electrical machinery for raising the bascules replacing the original hydraulic equipment was completed by the Trust in 1977.

This section lists the subjects commemorated on the memorial on this page:
Tower Bridge, 1977 - electrification

This section lists the subjects who helped to create/erect the memorial on this page:
Tower Bridge, 1977 - electrification

This section lists the other memorials at the same location as the memorial on this page:
Tower Bridge, 1977 - electrification

This clock was presented by members of the association, pupils and other frie...