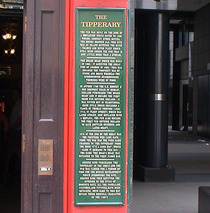 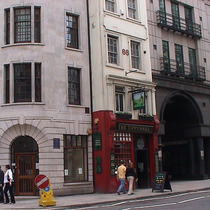 The Tipperary
The pub was built on the side of a monastery which dated to 1300 where, amongst other duties, the monks brewed ale. This site was an island between the River Thames and River Fleet which still runs under the pub that is now little more than a stream.

{Note: In our transcription we have retained the rather idiosyncratic use of apostrophes and English generally.}

Maps showing the route of the River Fleet do not show it passing through this site. This brings into question the veracity of all the text on this plaque. Experiences like this mean that we tend not to collect pub plaques any more.

2018: Martyn Cornell shares our views of the reliability of the information on this plaque and he corrects all the errors he has found, as follows:

"I’ve read plenty of wildly inaccurate nonsense over the years, but that really is amazingly wrong At least a dozen errors in just ten sentences. The pub owner’s name was JG Mooney & Co Ltd. Not "SG Mooney & Son". Mooney’s weren’t brewers, but pub and bar owners and wholesale and retail drinks suppliers, based in Dublin, and founded by James G Mooney, who was in business by 1845 and who turned the operation into a limited company in 1888. Mooney’s acquired its first pub in London in 1889 (on The Strand), and the Boar’s Head at 66 Fleet Street was its fourth London outlet, taken over in November 1895. Not "approx 1700", unless you think nearly two centuries out is "approx". Like the company’s other pubs in London, it traded under the name Mooney’s Irish House. The Boar’s Head dates back to at least 1443, not 1605, when “Le borys head” was part of the same grant to the Carmelite friars (the “White friars”) as the Bolt-in-Tun next door (the Bolt-in-Tun became a well-known coaching inn, but closed when the ailways arrived). The house of the Carmelites in Fleet Street was founded by Sir Richard Gray in 1241. The Boar’s Head was actually destroyed in the Great Fire of London in 1666, but rebuilt and back in business by 1668. It is, of course, nonsense to say that the Boar’s Head/Tipperary was “the first Irish pub outside Ireland” - it wasn’t even the first Mooney’s Irish House outside Ireland. Nor, of course, was it the first pub outside Ireland to have bottled, or draught, Guinness. There is no evidence that I have been able to find that the pub was called the Tipperary before the 1950s: it was still being referred to as Mooney’s Irish House in Fleet Street in 1950. it wasn't called the Tipperary until 1968: before that it was the Irish House."

Thanks for all that, Martyn - a lesson to us all to take these "historical" pub plaques with a pinch (a bucket full?) of salt.

This section lists the subjects commemorated on the memorial on this page:
Tipperary pub

F.R.S. "the father of English clockmaking". Buried in Westminster Abbey.

Fulham 2000To commemorate the significant contribution to the restoration of ...

{Beneath an image of a Victoria Cross medal:}Captain Walter Stone Royal Fusil...

English Heritage In this house the Pre-Raphaelite Brotherhood was founded in ...