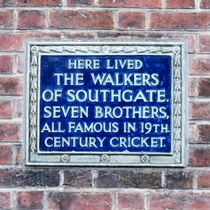 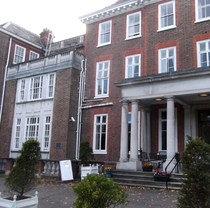 Plaque: The Walkers of Southgate

This is one of those plaques modelled on those of the City of London.

Site: The Walkers of Southgate (1 memorial)

The banker James Colebrooke bought the Arnold's Estate, demolished the manor house and built this house which was finished by his son after his death in 1752. The house and the estate became known as Arno's so the next owner, Sir William Mayne, renamed it Arnos Grove (the case of the disappearing apostrophe). With the acquisition of Minchington Hall the estate used to extend west to Waterfall Road and south to Bowes Road. Wikipedia have a plan.

1777-1918 owned by the Walkers of the Taylor Walker brewing family. 1928 the house was sold to North Metropolitan Electricity Supply Company and then enlarged to the south and the north. 1975 sold to Legal & General and renamed Southgate House. In 1997-8 it became a residential care home, all but the southern section which became luxury apartments.

This section lists the subjects commemorated on the memorial on this page:
The Walkers of Southgate

This plaque is in the same style as others erected by Firemen Remembered, alt...