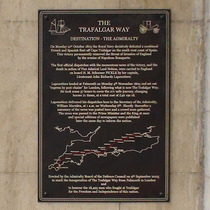 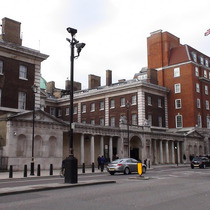 The Trafalgar Way
Destination - The Admiralty
On Monday 21st October 1805 the Royal Navy decisively defeated a combined French and Spanish fleet off Cape Trafalgar on the south west coast of Spain. This victory permanently removed the threat of invasion of England by the armies of Napoleon Bonaparte.

The first official dispatches with the momentous news of the victory, and the death in action of Vice Admiral Lord Nelson, were carried to England on board H. M. Schooner Pickle by her captain, Lieutenant John Richards Lapenotiere.

Lapenotiere landed at Falmouth on Monday 4th November 1805 and set out "express by post-chaise" for London, following what is now The Trafalgar Way. He took some 37 hours to cover the 271 mile journey, changing horses 21 times, at a total cost of £46 19s 1d.

Lapenotiere delivered his dispatches here to the Secretary of the Admiralty, William Marsden, at 1 a.m. on Wednesday 6th. Shortly thereafter a summary of the news was posted here and a crowd soon gathered. The news was passed to the Prime Minister and the King at once and special editions of newspapers were published later the same day to inform the nation.

Erected by the Admiralty Board of the Defence Council on 9th September 2005 to mark the inauguration of The Trafalgar Way from Falmouth to London and to honour the 18,425 men who fought at Trafalgar for the Freedom and Independence of this nation.

{At the top the plaque depicts a sailing ship and a carriage. Lower down is a map showing the route of The Trafalgar Way.}

This section lists the subjects commemorated on the memorial on this page:
The Trafalgar Way - Admiralty

This section lists the subjects who helped to create/erect the memorial on this page:
The Trafalgar Way - Admiralty

This section lists the other memorials at the same location as the memorial on this page:
The Trafalgar Way - Admiralty

Clink PrisonThe Clink Prison is the name given to all the prisons that have s...

Hackney Citizen 25 June 2014 gives the history of the club and explains "A co...