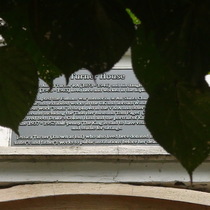 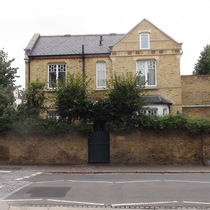 Plaque: The sculpting Turners and Paget

Alfred sculpted the Fulham war memorial at All Saints Church and other public and exhibited works in the UK and abroad. Winifred's most famous work 'Youth' is displayed in the V&A and other works are in museums including the Tate. Her husband Tom Paget (1893 - 1974) engraved both Drake's Golden Hind and the portrait of King George VI on the 1937 - 1952 half-penny. The King is said to have visited the house and studio for sittings.

Jessica Turner (known as Bill) who also lived here donated many of her sister's and father's works to public institutions before her death in 1995.

At the back of this house, accessed from Lettice Road, to the left of our photo is a building "Turners Studio". It looks new but is presumably on the site of Alfred and Winifred's studio. 44 itself has been so cleaned that it looks almost new itself.

The plaque is above the front door, hidden by the foliage in our photo.

2019: Dezeen has a post, with photos, about an architect, in Chelsea, transforming "... a pair of artists' studios that may once have belonged to JMW Turner into a lofty family home...". We are certain the site in question is the Lettice Road property and hence, for the second time today (really! see Jane Austen's red brick mansion block for the other one) we have a property website jumping to the wrong conclusions about the history of a building.

This section lists the subjects commemorated on the memorial on this page:
The sculpting Turners and Paget

Sculptor and medallist. Born in Watford to an artistic family as Thomas Humph...

Known as Bill. Donated many of her sister's and father's sculptural works to ...

This section lists the other memorials at the same location as the memorial on this page:
The sculpting Turners and Paget

This is an unusual plaque - painted on a large wooden board that looks like i...