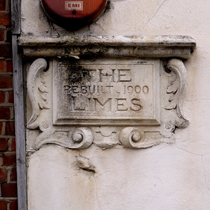 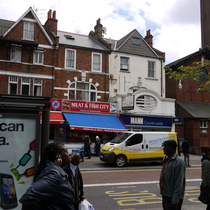 In our photo the plaque is just visible below the red burglar alarm on the upper left of the white building.

This 1895 map shows that the house and grounds known as The Limes used to stretch from immediately south of what is now (2021) number 155 (Bright Homes) down to about where the church tower now is. From the church tower down to, and including, Hollingsworth House was occupied by a terrace of 5 houses.

Hidden London informs: "St Saviour’s Catholic church was built ... in 1909, though its landmark campanile ... was not completed until 20 years later." The plaque suggests that the terrace of 6 houses now north of the church were built in 1900, probably all part of the same demolition/development project together with the church and at least some of the buildings to the south. We believe the 1909 date comes from a foundation/opening stone for the church that we have not seen, probably inside.

The map shows an odd curve in the eastern boundary of The Limes grounds, possibly created to accommodate a large tree, now long gone.  It's striking that this wrinkle still exists in the boundary wall - you can see it in Google satellite view.

This section lists the subjects commemorated on the memorial on this page:
The Limes

In the mid-eighteenth century, The Limes was one of the largest houses in Lew...

This precinct was created to commemorate the Silver Jubilee of Her Majesty Qu...

Lovely graphic border to this plaque - ears of corn.

Middlesex Hospital and Barnato and Joel

We had not heard of the Barnato-Joel family before coming across this plaque....

This stone was laid for the glory of God by Commissioner Adelaide Cox on beha...