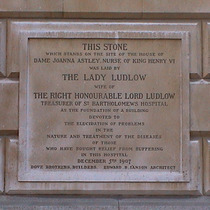 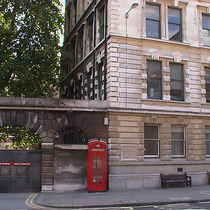 This stone, which stands on the site of the house of Dame Joanna Astley, nurse of King Henry VI, was laid by The Lady Ludlow, wife of the Right Honourable Lord Ludlow, Treasurer of St. Bartholomew's Hospital, as the foundation of a building devoted to the elucidation of problems in the nature and treatment of the diseases of those who have sought relief from suffering in this hospital. December 5th 1907.
Dove Brosthers - Builders
Edward B. I'Anson - Architect

Oh dear, get the wording wrong on a plaque and people are still sniggering years later. We hope "those who have sought relief from suffering in this hospital" get some relief from this plaque.

From the British Medical Journal, 15 May 1909, we learn that the pathology block of St Bartholomew's Hospital was opened on 7 May 1909. It occupies the site of the house which Joanna Astley rented from the hospital on her retirement in circa 1430. This house was first replaced with a row of shops which were then demolished to make way for the pathology block.

This pathology block is not to be confused with Barts Pathology Museum, built by E. B. l'Anson's father, also an architect, in 1878-9.  See Londonist for photos of the inside of that and some of its gruesome contents.

This section lists the subjects commemorated on the memorial on this page:
St Bartholomew's Hospital - Astley

Guild of the Royal Hospital of St Bartholomew

The Guild is a voluntary organisation that supports the work of the hospital....

This section lists the subjects who helped to create/erect the memorial on this page:
St Bartholomew's Hospital - Astley

Architect.  Born Clapham Common and brought up in Grayshott, a village in Ham...

Treasurer of St. Bartholomew's Hospital in 1905-8.

The foundation stone to which this plaque refers reads "National Provident In...

This stone was laid by the Rt. Hon. Sir William Robert Pryke, Lord Mayor, on ...

The "Lord Mayor of the City of Westminster" was present but no name is given....