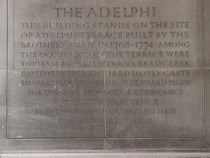 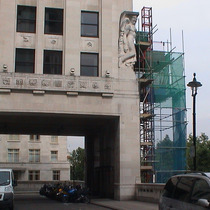 The Adelphi
This building stands on the site of Adelphi Terrace built by the brothers Adam in 1768 - 1774. Among the occupants of the Terrace were Topham and Lady Diana Beauclerk, David Garrick, Richard Doyle Carte, Thomas Hardy & George Bernard Shaw, The London School of Economics and Political Science and the Savage Club also had their premises here.
LCC 1951

The original Adelphi was a large development, even in modern terms. Most of the streets were named after the Adam brothers as was the whole Terrace since Adelphi is Greek for 'brothers'.

The river-facing row of houses known as Adelphi Terrace was replaced with this large modern block, The Adelphi, in 1938, designed by Stanley Hamp of Collcutt & Hamp.

This section lists the subjects commemorated on the memorial on this page:
The Adelphi

Founded by the four Fabians: Beatrice and Sidney Webb, Graham Wallas and Geor...

A gentlemen's club, now in Whitehall Place, with its own website. Had premis...

This section lists the subjects who helped to create/erect the memorial on this page:
The Adelphi

On this site stood the Paragon Works of the Brilliant Sign Company. Formed in...