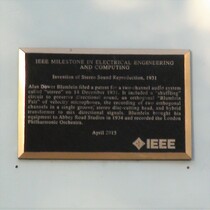 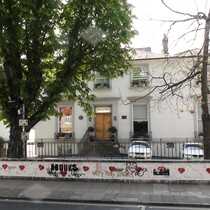 This is the most technical plaque we've ever transcribed - and we are none the wiser.

Abbey Road Studios were opened in November 1931 by EMI. The Blumlein plaque is to the right, Elgar to the left.

A live webcam has been set up on the boundary wall pointing at that pedestrian crossing. Londonist posted this lyrical short film about the crossing.

We've read that when George Harrison died members of the studio set up huge speakers at the front and played 'All Things Must Pass' to the crowds of mourners.

This section lists the subjects commemorated on the memorial on this page:
Alan Blumlein

This section lists the subjects who helped to create/erect the memorial on this page:
Alan Blumlein

This is a professional association for electronic engineering and electrical ...

This section lists the other memorials at the same location as the memorial on this page:
Alan Blumlein