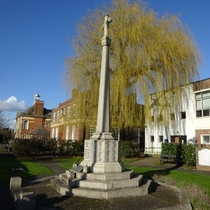 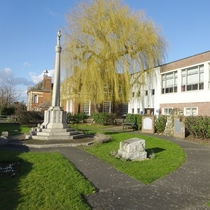 {Small plaque on the base:}
This memorial garden was extended in memory of those who fell in World War II and whose names are inscribed in the book of remembrance lodged in the central library.
11th November 1952.

There are several names at the bottom of the memorial which are not in alphabetical order. Presumably these were added after the memorial was erected.

The Belcher plaque is on the stone in the foreground of our photo, and the St Mark's cairn and WW2 memorials behind it.

This section lists the subjects commemorated on the memorial on this page:
Surbiton war memorial - WW1 names and WW2

This section lists the other memorials at the same location as the memorial on this page:
Surbiton war memorial - WW1 names and WW2

{Beneath an image of a Victoria Cross medal:} Lance Sergeant Douglas Belcher ...

{Plaque on the cairn:} This cairn is of stone from the parish church of St. M...

George V should have been on duty to unveil this but he was seriously ill so ...

{The plinth and the cross are both 6-sided:}{On the plinth, facing Dean Stanl...