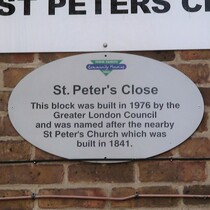 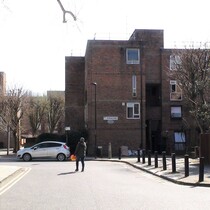 St Peter's Close
This block was built in 1976 by the Greater London Council and was named after the nearby St Peter's Church which was built in 1841.
THCH Tower Hamlets Community Housing THCH

The church, St Peter's, is out of shot, over to the left.

From Wikipedia's St Peter's Bethnal Green page: "Built as a commissioners' church in 1840-1, its architect was Lewis Vulliamy. The Vicarage is adjacent, as is a church school, now an organ works. All three buildings are Grade II listed. As built, its general configuration was that of a typical late Georgian preaching box – broad nave with galleries, west tower and shallow chancel. It was built of stock brick with knapped flint panels and stucco and terracotta trim. The style is very free neo-Norman. St Peter’s is now one of only five functioning churches to survive from Bishop Blomfield’s original 1840s Bethnal Green churches, and is the only one that remains fully intact. The others were either destroyed in the Blitz or by fire or have now been converted into flats."

We have found 7 plaques in this style on nearby apartment blocks, most built in 1976. Four of the blocks are named after fish: Grayling Square, Lampern Square, Mullet Gardens and Zander Court. The other nearby same-style plaques are at Nelson Gardens and Cobden House.

We were thinking that fish is a strange theme, and was probably not chosen by the residents, when we found a booklet displayed by Walk East, "Terraces, Tenements and Tower Blocks - a self-guided walk around the housing heritage of Bethnal Green". This contains: "To the south {of St Peter's} there's the Avebury East Estate. Old maps reveal there was a fishpond here, which explains why the blocks have fishy names such as elver, grayling and mullet. In the middle, the Zander Court community centre gardens flourish."

We checked John Roque's 1746 map and that shows no ponds where these flats are built, but old maps can vary on features like these.

This section lists the subjects commemorated on the memorial on this page:
St Peter's Close

This section lists the subjects who helped to create/erect the memorial on this page:
St Peter's Close

THCH is a charitable housing provider managing over 3,000 homes exclusively i...