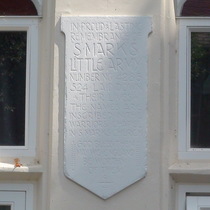 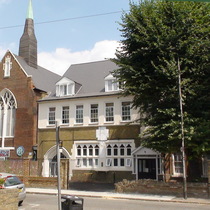 In proud lasting remembrance of " S.Mark's Little Army" numbering 4286. 524 laid down their lives. The names are inscribed in the Warriors Chapel in S. Mark's Church.
God bless them. May we England be worthy of them.

We thought the last line may be a quotation but we cannot find it anywhere. It would be interesting to know if the Warriors Chapel has survived. Were the names inscribed on a plaque or in a book? Has it been taken to St Philips?

This is an unusual memorial, just one, though we've taken separate photos of its two parts.

This parish supplied 4,286 men to the armed forces in WW1, more than any other London parish, hence "St Mark's Little Army". Albert Edward McKenzie was one of them.

From Art in the Park and the Listing entry: Designed by Norman Shaw, the church (on the left edge of our photo) was built in 1879. completed at west end 1931-2 by (Albert) Victor Heal (1887 - 1975). (Additions to east end of 1883 by Shaw removed after bomb damage.) West end completed with full height 1-bay extension of nave. In 1965 the parish of St Marks was united with the parish of St Philip, Avondale Square and that 1963 church became the parish church. 1980 St Marks was converted into a mosque.

We cannot find the date of the building with the memorial, immediately to the south of the church, but it is shown on this 1898 map as "Sunday School". It was for sale in 2009 and now, 2018 it is flats.

The building to the right, the south, also carries a prominent Patriarchal Cross so, at one time, that must also have been connected with the church. And this 1897 map shows the church and this building as one, albeit labeled St Mary's Church, instead of St Marks (a mistake we believe, and an easy one to make).

This is an extremely quiet road, especially on a Sunday when we visited. As we stood there in the road taking pictures, a car from a driving school hooted. There was plenty of room for it to pass behind us so we indicated that we had seen it, and carried on with our photos. The driver took the vehicle past us with plenty of room, while the instructor shouted "I didn't want you to wave, I wanted you to get out the road!" And the tone of voice was not friendly. That trainee driver was being taught a deplorable attitude to pedestrians. 1st Time School of Motoring - we're talking about you!

This section lists the subjects commemorated on the memorial on this page:
St Mark's Little Army - names

St Mark's Camberwell - those who died in WW1

This section lists the other memorials at the same location as the memorial on this page:
St Mark's Little Army - names