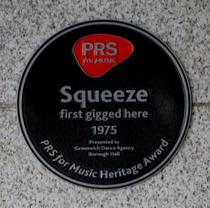 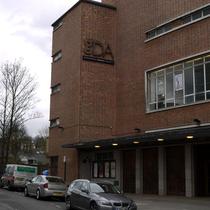 After the plaque was unveiled by members of the band, it promptly disappeared. Trophy hunting was suspected, which would have been particlulary daring as there is a police station literally feet away. It transpired that the Greenwich Borough Hall is a listed building.(hard to see why from the outside, but it does contain some art deco features). Greenwich Borough Council gave permission for the plaque to be erected temporarily, on condition that it was then taken down awaiting planning application. The plaque was re-erected some time in February 2011. It was originally in a prominent position on the side of the building, but is now stuck next to a fire alarm.

This section lists the subjects commemorated on the memorial on this page:
Squeeze debut gig

This section lists the subjects who helped to create/erect the memorial on this page:
Squeeze debut gig

Not a good choice of stone for a plaque.

Yeo-Thomas lived here with his common-law wife, Barbara, from 1941 until abou...

Site of the King's Arms Tavern where the first meeting of the Marine Society ...