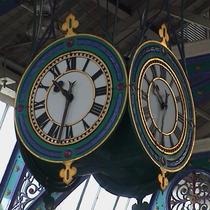 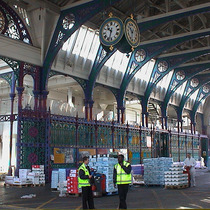 The words come from a very dull modern plaque attached to the railings.

London Uncovered gives: "A four-faced drum clock by Thwaites & Reed of Clerkenwell was installed in 1870 and hand-wound for almost a century before conversion to electricity."

This market was built with a railway system below through which the meat could be delivered. Caroline's Miscellany has an entry about it. Much of it is now used for car parking but the curved cobbled ramp (built for horse-drawn carts) remains and can be seen around the edge of the small garden to the south.

This section lists the subjects commemorated on the memorial on this page:
Smithfield Clock

This section lists the subjects who helped to create/erect the memorial on this page:
Smithfield Clock