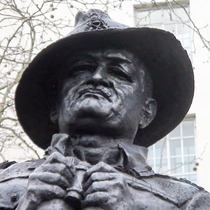 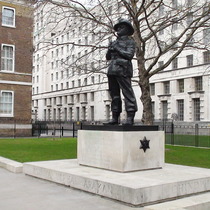 {On both sides of plinth, below a bronze star:}
Defeat into victory

{On the base of the statue:}
Ivor Roberts-Jones RA
Cast by Meridian Fine Art, London

This section lists the subjects commemorated on the memorial on this page:
Slim statue

Field Marshal. Born near Bristol, brought up in Birmingham. Fought and was wo...

This section lists the subjects who helped to create/erect the memorial on this page:
Slim statue

This building was completed in September 1960. It replaces buildings destroye...

{Above a stylized picture of two performers:}Palace TheatreBuilt for Richard ...

{Beneath a representation of the Victoria Cross medal:}Second Lieutenant Fred...