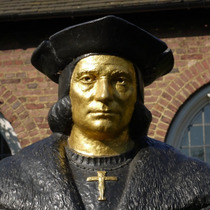 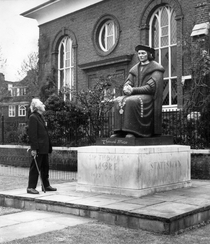 {On the base of the statue, in script that is based on his signature:}
Thomas More

Unveiled by Horace Maybray King, then Speaker of the House of Commons.

2018: Clive Duncan kindly wrote, introduced himself and provided some fascinating insights into the creation of this sculpture:

I was a sculpture student at the Camberwell School of Art and Cubitt taught there during the 1960s. He employed me to carve the inscription and prepare the signature for casting in bronze. I carved the inscription on all four sides of the Sir Thomas More statue base in a tiny shed built on site. More's signature was taken from one of his documents and enlarged, carved in wax and reproduced in bronze. It was the signature which could have saved his life.

Cubitt's studio was in the basement of his home in Eccleston Square under the headquarters of the Buddhist Society which was housed on the ground floor. His studio was lit by a large glass roof in the light well of the building. This is of significance as, during a violent lightening storm over London, Cubitt looked at his clay figure in the flashes of lightening and remodelled the head. When I saw it the next day, the head had a calm expression and the severity of the Holbein portrait, the blue print, had softened in the clay interpretation. Also, More's hands had changed, now clasped not in prayer or supplication but in resolution! Cubitt went to great lengths to demonstrate the difference using his own hands.

The Royal Standard of Henry Tudor is on the back of the chair, the chain of office is on his lap but the crucifix is round his neck. His gaze is gently turned slightly to the left, his last journey down river to the Tower; seated as he is in what was his own garden facing the Thames awaiting the King's barge. Cubitt signed the sculpture on top of More's cap. 'Only the pigeons and God can see who made this statue' he said to me during the unveiling.

Cubitt had been expert in camouflage in the army and a mine had exploded causing loss of his arm muscles. The effort taken to make a large sculpture was physically difficult for him but he was passionate about the commission which gave him added strength.

The gold face of More is difficult to explain. Cubitt was influenced by the Buddhist sculptures he saw each day as he passed the Society entrance above his studio, he also admired Byzantine art that used colour and gold in the icons. Gold leaf was selected and at that time it was a warm gold - it must have been re-gilded recently {2018} as it is slightly acidic.

We normally take our location photo ourselves but his family, Beth and John Charles, have kindly allowed us to use this imposing image of Bevis communing with More.

This section lists the subjects commemorated on the memorial on this page:
Sir Thomas More statue - SW3

This section lists the subjects who helped to create/erect the memorial on this page:
Sir Thomas More statue - SW3

Sculptor. Sculpture assistant to a number of sculptors including Cubitt Bevis...