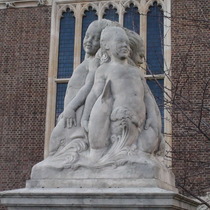 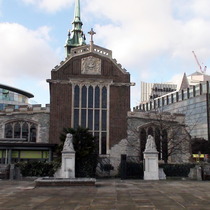 {Inscribed on the right-hand-side stone gate pier, under a crest bearing the motto:} Humiles exaltat

Since they are rather lovely we chose to photo one of the gate-post sculpted finials rather than the inscription.  The other sculpture depicts a similar close grouping of dolphins, waves and cherubs, one blowing a shell-like horn.  The cherubs' faces somehow suggest a gender split with the girls here on the east and the boys to the west.

The PMSA says "Each of these groups comprises two children with dolphins swimming around them. Their frolicking pagan style contrasts rather vividly with the relief of the Toc H Lamp, also by Cecil Thomas, on the east wall of All Hallows, behind them."

This memorial, "The Sea", was erected as part of the restoration of All Hallows church (behind) after its war-time damage.

Ornamental Passions has good pictures of these sculptures.

This empty expanse is the main 'improvement' created by Follett and the Tower Hill Improvement Trust. With the specific aim of improving the view, they bought and then demolished the bombed warehouse that used to stand here and replaced it with this wind-blown prairie. Behind the camera should be a good view of the Tower of London but this is ruined by the modern visitor centre/gift shop. Ironic, sad or just crass?. We have the sense that this terrace is the roof of something but we haven't quite figured out the topology of this complex area (predictably it turns out to be an underground tourist tat shopping arcade).

This section lists the subjects commemorated on the memorial on this page:
Sir Follett Holt

This section lists the subjects who helped to create/erect the memorial on this page:
Sir Follett Holt

The streets laid out on the site of York House were named: Villiers Street, D...

This gate was erected by his family to the loved memory of Lieut-Commander J....