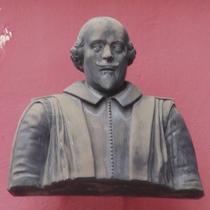 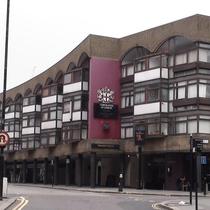 The pub below is of course 'The Shakespeare' but wasn't always. Dead pubs records: "Originally called the White Hart, at 1 Goswell Street in 1856 & earlier; but changed its name to the Corner Pin between around 1862 and 1900, before reverting to the White Hart. I don't think that the pub survived WWII, although I am not sure. On 23 April 1964 a new pub opened on this site at 2 Goswell Road, which remains open today and is called the Shakespeare - recalling the pub of that name that used to stand 50 yards up the road at No. 44."

This section lists the subjects commemorated on the memorial on this page:
Shakespeare bust - EC1

{On a masonry shield just below Victoria's bust:}Jubilee 1837