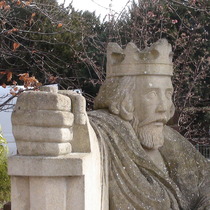 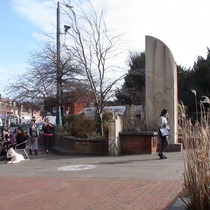 {On the plaque:}
The sealing of the Magna Carta at Runnymede, 1215 AD

The sealing of the Great Charter of Democracy was preceded by nine days of negotiations between King John and twenty five Barons led by Robert Fitzwalter Lord of Dunmow. This monument symbolising the event was sculptured by David Parfitt.

Is there a verb "to sculpture"? The tableau panels, the "achievements of the local enthusiasts", are on the road-facing side of this monument and are of variable quality. They depict some local scenes including: the river, the Lutyens bridge and Concorde, and usefully, one incorporates the date, 1994.

Attached to a boulder to the right of our picture, just behind the grasses, is a plaque reading: "The King John sculpture was commissioned with financial assistance from Procter & Gamble (Health and Beauty Care) Ltd". This boulder also has a recess which must have previously held another plaque, possibly more interesting but we will never know.

The plaque we have transcribed can be seen in our photo behind the passer-by.

This section lists the subjects commemorated on the memorial on this page:
Sealing of the Magna Carta - Egham

Constable of Baynard's Castle.  Led the 25 barons who negotiated with King Jo...

This section lists the subjects who helped to create/erect the memorial on this page:
Sealing of the Magna Carta - Egham

Sculptor.  No information available but we don't think he's the same David Pa...

This section lists the other memorials at the same location as the memorial on this page:
Sealing of the Magna Carta - Egham

The translation is provided by our language consultant, David Hopkins. He po...

{On the small plaque on the wall to the left:}For Anna Kendall, headteacher o...