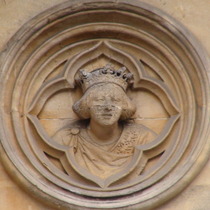 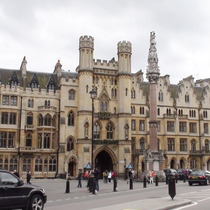 The building is Grade II listed, a terrace of Bath stone buildings incorporating gateway to Dean's Yard. 1853-54 by Sir George Gilbert Scott. Some sources say these were built as houses which seems unlikely but they are certainly now used as offices.

Niches in the turrets, at first floor, house two very similar statues. The spandrels of the gateway are decorated with two roundels with portrait heads, one of which is crowned. These all seem to represent particular individuals but we can find no information, so we have to guess.

The statues are crowned and each clutches a model building, with slightly different fenestration. So we think they are the two kings central to the creation of Westminster Abbey: Edward the Confessor who, in 1042-52, (re)built St Peter's Abbey here, and Henry III who, in 1245, began the building of the current Abbey. Comparative beard lengths seem to corroborate our theory.

And the two heads must represent Victoria and Albert: the female wears a crown and the male doesn't, the date of the building, they even look like some of their portraits.

This section lists the subjects commemorated on the memorial on this page:
Sanctuary - head on left - Victoria

This section lists the other memorials at the same location as the memorial on this page:
Sanctuary - head on left - Victoria