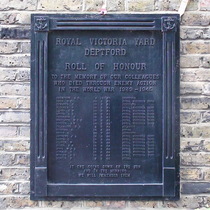 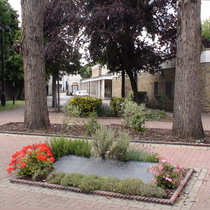 Royal Victoria Yard Deptford - Roll of Honour
To the memory of our colleagues who died through enemy action in the World War 1939 - 1945.

At the going down of the sun and in the morning we will remember them.

On 19 March 1941 the Yard was hit by many bombs and incendiary devices leading to a hugely damaging fire. 7 of those named here died as a result. Just a few months later, 16 August, a V1 flying bomb landed here, killing another 7. We are grateful to Lewisham War Memorials who have provided this information and have more details on all the individuals named.

Our photo is taken from the east. In the background you can see the inside of the retained arched stone entrance to The Colonnade from Grove Street. The Officers' Quarters plaque is in the colonnade. The two black metal plaques are on the wall to the right.

This section lists the subjects commemorated on the memorial on this page:
Royal Victoria Yard war memorial

This section lists the subjects who helped to create/erect the memorial on this page:
Royal Victoria Yard war memorial

This section lists the other memorials at the same location as the memorial on this page:
Royal Victoria Yard war memorial

Officers' Quarters This colonnaded range of buildings was constructed as quar...