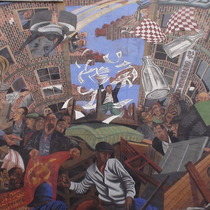 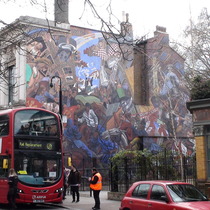 {On a banner towards the left:}
Mosley shall not pass. Bar the road to British Fascism.}

{On a banner near the middle:}
Independent Labour Party

From a letter to the Guardian from Desmond Rochfort, 26 September 2016: Dan Jones of Tower Hamlets council commissioned the mural. The work was begun by Binnington on his own but when the mural was attacked with racist slogans he abandoned the work. Walker was then asked to take it over and he brought Butler and Rochfort in on the job of redesigning and repainting. Then Walker died suddenly so Butler and Rochfort finished the work, completing it in 1987.

2018: Butler wrote to us, giving a slightly different version of the facts, saying that he and Walker finished the work in 1984. We are not in a position to arbitrate and will accept no further communication on this topic. It's a great mural and everyone involved should be proud of their achievement.

On a modern information board:
"On 4th October 1936 the people of the East End halted a march by fascists in what has gone down in history as 'The Battle of Cable Street'.  People from the Jewish community, communists, trade unionists, Labour Party members, Irish dockers and labourers joined forces to oppose the march through Stepney planned by Sir Oswald Mosley, leader of the British Union of Fascists (BUF) and thousands of his followers, known as 'Blackshirts'.  Their uniforms echoed those used by their counterparts in Italy and Germany and the arm-raised salute was used as a symbol of their political allegiance.

The planned route was through an impoverished area with a high concentration of Jewish residents and was seen as a deliberate provocation.  The government of the day refused the request by Jewish, local and community groups to ban the march and on the day over 250,000 East Londoners took to the streets to bar the way to British fascism.  The Spanish Civil War had begun a few months earlier and opposition to Mosley's Blackshirts was seen as the same struggle as that being fought by the Spanish Republicans against Franco's German and Italian backed Nationalists.  The slogan used by the Republicans in the defence of Madrid was adopted at the barricades in Cable Street - They Shall not Pass (No Pasaran).

The ensuing action ensured that Mosley's marchers were turned back - and political history was made.  One resulting legacy was The Public Order Act of 1936, banning the wearing of political uniforms in public.  More importantly, on the day itself, the fascists 'did not pass' and the people of the East End played a crucial role in the defeat of organised British fascism for decades to come.

The mural on the west wall of St George's Town Hall was commissioned to commemorate the events of 1936.  Work was started in 1976 by artist Dave Binnington whose designs were partly inspired by the famous Mexican moral artists David Alfaro Siqueiros and Diego Rivera.  There were setbacks with several acts of vandalism on the work in progress and Dave was unable to complete the project.  The work was taken up by artists Paul Butler, Ray Walker and Desmond Rochfort, who brought their own skills, designs and ideas to the project whist achieving a stylistic unity.  The mural was finally completed in 1983.  The finished work measures approximately 17 x 18 metres and has become an important pictorial document with both historic and artistic significance.

Since its completion particular areas of the mural have required attention but by 2011 it was in need of major restoration, including repairs to the render on which it sits. As guardians of the mural, Tower Hamlets Council commissioned the necessary works with funds secured through a Planning contribution from property developers Ballymore.  Hirst Conservation were appointed to do the restoration works, along with Paul Butler, one of the original artists, who carried out the necessary repainting.

This epic mural serves to remind us of what can be achieved when communities join together against those who seek to divide them.

Bonus fact: Go west from here and you will quickly find School Mews, to the south. This leads to the school building (still standing but now residential Mulberry Court) for St George in the East School, where E. R. Braithwaite taught and on which he based his 1959 autobiographical novel, 'To Sir, With Love'. The 1967 film used a different location entirely.

This section lists the subjects commemorated on the memorial on this page:
Cable Street mural

Mosley planned to march thousands of his British Union of Fascists through th...

This section lists the subjects who helped to create/erect the memorial on this page:
Cable Street mural

This section lists the other memorials at the same location as the memorial on this page:
Cable Street mural