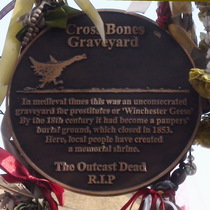 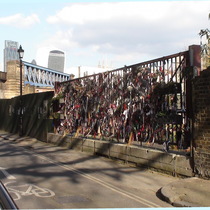 Cross Bones Graveyard
In medieval times this was an unconsecrated graveyard for prostitutes or 'Winchester Geese'. By the 18th century it had become a paupers' burial ground, which closed in 1853. Here, local people have created a memorial shrine.
The Outcast Dead - RIP

This graveyard has a website all its own and the colourful crowd-sourced memorials attached to the railings are a splendid commemoration of the sad lives of the women who worked in the medieval sex trade. It's also good that the site has been saved from development.

The Museum of London carried out an archaelogical study in 1992 and reports: "The Cross Bones burial ground served the poor of the parish of St. Saviour’s, Southwark, but the ground is thought to have originally been established at least as early as the 17th century, as a single women’s (prostitutes’) cemetery. By 1769, it had become a paupers cemetery and remained so until its closure in 1853."

This section lists the subjects commemorated on the memorial on this page:
Cross Bones Graveyard