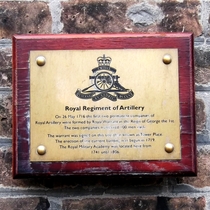 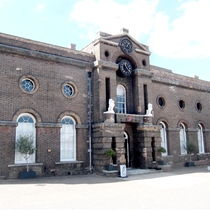 {Beneath the Royal Artillery badge with the motto Ubique Quo Fas et Gloria Ducunt (Everywhere That Right and Glory Lead):}.
Royal Regiment of Artillery
On 26 May 1716 the first two permanent companies of Royal Artillery were formed by royal warrant in the reign of George the 1st. The two companies numbered 100 men each.
The warrant was signed on this site then known as Tower Place. The erection of the current building was begun in 1719. The Royal Military Academy was located here from 1741 until 1806.

This section lists the subjects commemorated on the memorial on this page:
Royal Regiment of Artillery - replacement plaque

This section lists the other memorials at the same location as the memorial on this page:
Royal Regiment of Artillery - replacement plaque

{The round logo at the top of the plaque has an image of a house with these w...

The errors in the inscriptions (can be viewed at Victorian Web) are presumabl...