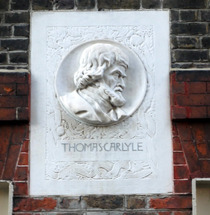 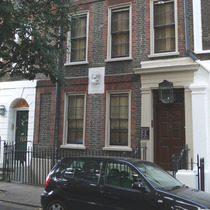 Thomas Carlyle
Lived at 24 Cheyne Row 1834-1881.
This tablet was erected by the Carlyle Society.
CFA Voysey Delt.
B Creswick Sc.
{All but the name are inscribed very small.}

This is where Carlyle died.

We know 'Sc.' indicates the sculptor, but 'Delt.'?  We asked a member of the museum staff who told us it is short for 'delinxit', meaning ‘he/she designed it’ but we couldn’t confirm that so we asked our Latin consultant, David Hopkins, who said: "… there isn’t a Latin verb with past tense 'delinxit'.  (If there was, it would be from 'delingo' and it would mean 'he licked it off'!)  I can’t find a standard abbreviation 'delt.' either.  My guess would be that it is probably the same as 'del.', which is short for 'delineavit' (= 'he sketched it')."

The museum person had just misremembered the Latin word. But now we all know how to say 'he licked it off' in Latin, so well worth the investigation.

Plaque erected on this site 1888 when the house number was 5.

This section lists the subjects commemorated on the memorial on this page:
Thomas Carlyle - SW3

This section lists the subjects who helped to create/erect the memorial on this page:
Thomas Carlyle - SW3

{In the spiral:}In 1466 the school attached to the church of St Dunstan in th...