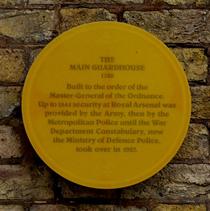 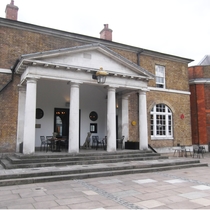 The Main Guardhouse, 1788. Built to the order of the Master-General of the Ordnance. Up to 1844 security at Royal Arsenal was provided by the Army, then by the Metropolitan Police until the War Department Constabulary, now the Ministry of Defence Police, took over in 1927.

By 2017 two non-memorial plaques had appeared: a bronze rectangle in the portico, which reads: "The pedestrian access through the main guard house was opened by Mr David Broughton C Eng, FI Mech E Director General Defence Quality Assurance on 25 June 1986. It replaces the main entrance to the Royal Arsenal built in 1829, the Beresford Square Gate, which was closed on 10 January 1984 following a sale of land to permit road development."

This section lists the subjects commemorated on the memorial on this page:
Royal Arsenal Main Guardhouse