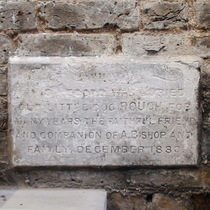 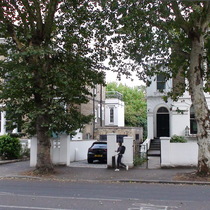 Beneath this ground was buried our little dog Rough, for many years the faithful friend and companion of A. Bishop and family. December 1890.

Victorian Gs and Cs are often indistinguishable, so the dog could be Rough or Rouch. We've gone with Rough because that's the noise dogs make, isn't it?

Initially we read the date as 1830 which was puzzling, since the street was not developed (by Henry Rydon) until 1851, and old maps show this address as just fields in 1830. But our tireless genealogy consultant, Andrew Behan, found Alfred and Sarah Bishop who, with their two sons (one of whom was also named Alfred), moved in between 1873 and 1876 and remained until Alfred died in 1886 and Sarah, his widow in 1891. On re-examination, using fingers, the date was found to be 1890.

So Sarah had been widowed 4 years when the family dog died, and herself survived less than a year. 15 years would be a long life for a dog so, if Rough joined the family as a puppy, that would have been shortly after they moved to this address.

The inscription does not make it clear but we think the plaque was probably erected by Sarah, and that the 'A. Bishop' referred to was the paterfamilias, her late husband, not their 32-year old son.

The plaque is on the boundary wall between the two houses in our photo. That section of wall now forms one wall of the garage to no.16 but we imagine that when the plaque was erected it was in the open.

This unusual memorial was brought to our attention by the current owners of no.16, Davey and Hilary, who kindly allowed us access for photographs. They only discovered the plaque when they renovated the garage and found it half buried, which explains why the top half is so distressed.

This section lists the subjects commemorated on the memorial on this page:
Rough, the Bishop family dog

Rough, the little dog of A. Bishop and family.

This section lists the subjects who helped to create/erect the memorial on this page:
Rough, the Bishop family dog

A. Bishop and family

In this tavern the Society of Industrial Artists and Designers, founded 1930,...