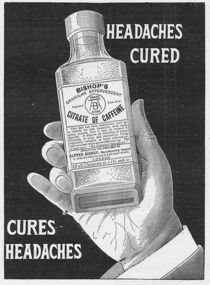 A. Bishop and family

Alfred Bishop was born in Stourport, Worcestershire, the eleventh and youngest child of William Bishop and Matilda Bishop née Broughton. His father was a Tailor and Draper. He was baptised on 6 August 1821 in Lower Mitton, Stourport, Worcestershire. The 1841 census shows him as an apprentice living with the family of George and Elizabeth Cocking in The Narrows, Ludlow, Shropshire. George Cocking was a Chemist and Druggist. In 1847 he married Sarah Beacall in Lambeth and the 1851 census shows them living at 25 King Square, Finsbury, his occupation being recorded as a Traveller for Chemist. They had two children; Walter Beacall Bishop (19 October 1853 - 13 December 1925) and Alfred Bishop (14 April 1858 - late 1924).

The 1861 census shows the whole family living at 5 Philpot Street, Stepney and his occupation is listed as a Chemist. Both their children were baptised on 24 January 1864 at St Mary's Church, Whitechapel and the baptismal register shows the family still living in Stepney and the father's occupation as a Manufacturing Chemist. The 1871 census shows him, his wife, Walter his elder son and a female domestic servant residing at 51 Philpot Street, Stepney, and his occupation was given as a Pharmaceutical Chemist.

Electoral registers show that he was registered to vote at 51 Philpot Street as late as 1873 but by 1876 he was recorded as the voter at 16 Highbury New Park, Highbury and the 1881 census confirms he was residing there with his wife, Alfred, his younger son and two female general servants. His occupation was recorded again as a Pharmaceutical Chemist and his younger son was shown as a Chemist.

He died, aged 65 years, on 31 December 1886 and probate records dated 5 March 1887 state that the will with a codicil of Alfred Bishop, late of Severn Villa, Highbury New Park in the county of Middlesex, manufacturing chemist, who died on 31 December 1886 at Severn Villa was proved at the Principal Registry, London, by John William Kay of 100 Commercial Road East, Middlesex, surgeon & apothecary, Sarah Bishop of Severn Villa, widow the relict, and Walter Beacall Bishop of 7 Gloucester Terrace, Margate, Kent, manufacturing chemist, the son, the executors. His effects totalled £56,552-11s-0d.

Sarah, his widow, continued to live there until she died in the house on 31 August 1891. Her probate records confirm that Severn Villa is the house at 16 Highbury New Park.

Alfred Bishop was born on 10 April 1858 in Spitalfields, London, the younger son of Alfred Bishop and Sarah Bishop née Beacall. His father was a manufacturing chemist. The 1861 census shows the family living at 5 Philpot Street, Stepney. Together with his elder brother, Walter Beacall Bishop, he was baptised on 24 January 1864 at St Mary's Church, Whitechapel. He is shown on the 1871 census as a pupil, boarding at the Dartmouth Grove School, Lewisham. The 1881 census shows him living with his parents and two female domestic servants at 16 Highbury New Park, Islington and his occupation was recorded as a Chymist. (sic).

On 22 April 1884 he married Katherine Louise Adams at All Saints Church, Branksome Park, Poole, Hampshire (now in the county of Dorset since 1974) and they had two children. Frank Hallam Bishop (1886-1960) was baptised on 11 November 1886 at St Paul's Church, Canonbury and the family residence on the baptismal records is shown as 29 Beresford Road, Canonbury. Vera Kate Bishop (1888-1952) was baptised on 16 June 1888 at St Paul's Church, Canonbury and the family was now shown to be living at 171 Highbury New Park, although his wife had died on 2 May 1888. He was remarried in the 2nd quarter of 1889 to Isabel Jackson in Christchurch, Hampshire (now Dorset). The 1891 census confirms that he and his new wife were living at 171 Highbury New Park with the two children from his previous marriage, a cook, a nurse and two housemaids. His mother, Sarah Bishop died at 16 Highbury New Park on 31 August 1891.

The chemist company his father created in 1857 became Alfred Bishop Limited in 1892 and was initially located at 48 Spelman Street, London, N1 and later at 74 Garden Walk, Cambridge. He and his new wife also had two children. Eric Alfred Bishop (1893-1907) who was baptised on 29 May 1893 at St Saviour's Church, Highbury and the baptismal records show the family still living at 171 Highbury New Park. Winifred Yvonne Bishop (1898-1948) was baptised at St Mary's Church, Wimbledon on 10 July 1898 and the family address by this time had changed to Sunnyhill, 113 The Ridgway, Wimbledon. The 1901 census confirms he was living at the same address with his wife, his four children, a cook, a domestic nurse, a parlour maid, a housemaid, a sewing maid and a house boy. He was still shown as a manufacturing chemist. His son, Eric Alfred Bishop, died aged 14 years in 1907. The 1911 census show him still at the Wimbledon address with his wife and daughter Winifred, together with a cook, two nurses, a parlour maid, a housemaid and a house boy. and his occupation remained as a manufacturing chemist. He died, aged 66 years, in 1924 and his death was registered in Christchurch, Hampshire.

And Andrew, hot on the scent now, investigated the family chemist business:
From Science Museum: 1857 - founded by Alfred Bishop Snr. who prepared granular effervescent citrate of magnesia. On his death carried on by his sons. 1892 - became a limited company. Other known products: Varalettes, Calcusol, etc.  Located at 48 Spelman Street, N1 (all redeveloped since) and later at 74 Garden Walk, Cambridge. Manufactories also in Barcelona, Spain, and Sydney, Australia.

The BMJ blog has an image of a 1917 advert for Varalettes, and eBay an image of an 1897 advert for BISHOPS CITRATE OF CAFFEINE Headache Cure, which, in the absence of an image of the family, we have used to stand in for them all.

This section lists the memorials created by the subject on this page:
A. Bishop and family

Victorian Gs and Cs are often indistinguishable, so the dog could be Rough or...

members of Hay's Wharf staff who died in WW1 & WW2

Founded in London. Its main objectives are the cultural interchange between G...

friends and followers of Wilfred Lawson

Lawson's friends and followers erected the memorial to him in Embankment Gard...