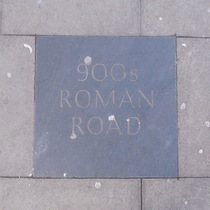 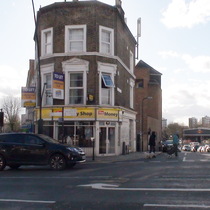 The Romans were in Britain AD 43 - 410 so we think the '900s' on the plaque refers to the period (early medieval) when the name 'Watling Street' is thought to originate.

This plaque is in the pavement, behind the car in our photo.

Mainly reusing pre-existing trackways the Romans constructed a number of paved routes that passed through London. One running from ports in Kent through to the Welsh border was later named Watling Street. Some of the London sections of Watling Street have been dated AD 47-48. Roman roads are famously long and straight so look at a map of London and you can see one section of Watling Street shooting northwest from Marble Arch.

This is one of a set of 7 pavement plaques - see Kilburn Bridge for the list.

This section lists the subjects commemorated on the memorial on this page:
Roman Road - Kilburn