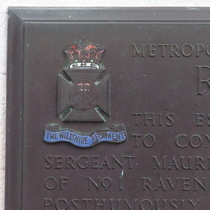 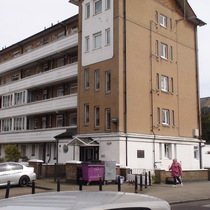 Rogers Estate
This estate is named "Rogers Estate" to commemorate the heroic death of Sergeant Maurice Rogers, VC, MM (Wiltshire Regt.) of No. 1 Ravenscroft, Bethnal Green, who was posthumously awarded the Victoria Cross for outstanding gallantry in Italy during the Second World War, 1939 - 1945. The official citation records that Sgt. Rogers destroyed two enemy machine-gun posts single-handed and was killed at point-blank range while attempting to destroy a third. As a result of Sgt. Rogers' gallantry and devotion to duty the position was carried.
Metropolitan Borough of Bethnal Green

The foundation stone on the northern wing of this U-shaped block is dated 1947. Wikipedia says that Rogers had a block of flats named for him in the White City Estate W12. None of the blocks there that we can find are named Rogers so we think Wikipedia may have got E2 confused with W12.

The plaque gives Rogers' address as "1 Ravenscroft, Bethnal Green". Spitalfields Life gives: "Ravenscroft Buildings, which stood where Ravenscroft Park sits today {Columbia Road E2} was built in 1897 and comprised one hundred and ninety-four flats." It was demolished in the 1980s.

This section lists the subjects commemorated on the memorial on this page:
Rogers Estate

This section lists the subjects who helped to create/erect the memorial on this page:
Rogers Estate

A supply of water by conduit from this spot was granted to the Abbey of Westm...