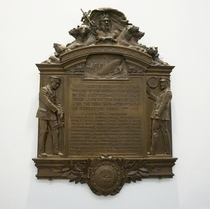 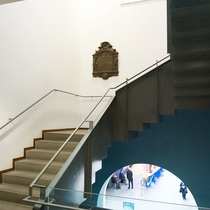 {Main panel, beneath an image of Poseidon flanked with polar bears, a representation of the Titanic sinking, and between two figures of engineers:}
This tablet is dedicated to the memory of the engine room staff of the S.S. "Titanic" who gave their lives at the post of duty when the vessel sank after striking an iceberg on April 15th, 1912.
Joseph Bell, Chief Engineer.
{Followed by 34 names in alphabetical sequence. See Commemorated subjects:}

{Medallion at the base of the memorial, around a steamship:}
Institute of Marine Engineers London
Ahead
Founded February Incorporated July 1889
Nec Remis Nec Velis.

The memorial was originally displayed in the foyer of the Institute of Marine Engineers memorial building at 76 Mark Lane in the City of London, and moved to 80 Coleman Street in 1999. Since 2013 it has been on loan to the National Maritme Museum, Greenwich.

We believe 'Nec Remis Nec Vellis' translates as 'neither oars nor sails', a reference to steamships.

There are also memorials to the Titanic engineers in Liverpool and Southampton.

The memorial is on a stairwell between the first and second floors.

This section lists the subjects commemorated on the memorial on this page:
RMS Titanic Engineers

2nd Electrician on the RMS Titanic. A résumé of his life can be found on the...

Chief engineer of the RMS Titanic. Born in Farlam, Cumbria, he moved to Newca...

A boilermaker on the RMS Titanic. A résumé of his life can be found on the En...

This section lists the subjects who helped to create/erect the memorial on this page:
RMS Titanic Engineers

It describes itself as the international professional body and learned societ...