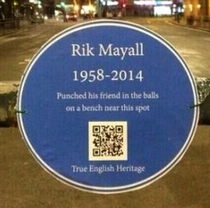 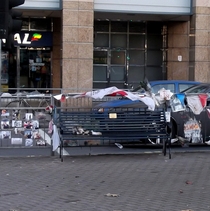 Rik Mayall, 1958 - 2014, punched his friend in the balls on a bench near this spot.
True English Heritage

This temporary plaque (photo from GoWestLondon) was fixed near to the spot where the bench used in filming the opening credits for the television series 'Bottom' was located. The original bench had been removed, but after Mayall's death, a petition signed by about 7,000 fans persuaded Hammersmith and Fulham Council to instal a new one.

We revisited the site recently and noted that a lot of the 'tributes' (including the soiled underpants) have been removed.

This section lists the subjects commemorated on the memorial on this page:
Rik Mayall 1

This section lists the subjects who helped to create/erect the memorial on this page:
Rik Mayall 1

This section lists the other memorials at the same location as the memorial on this page:
Rik Mayall 1